Of Sine Waves and Shelf Space 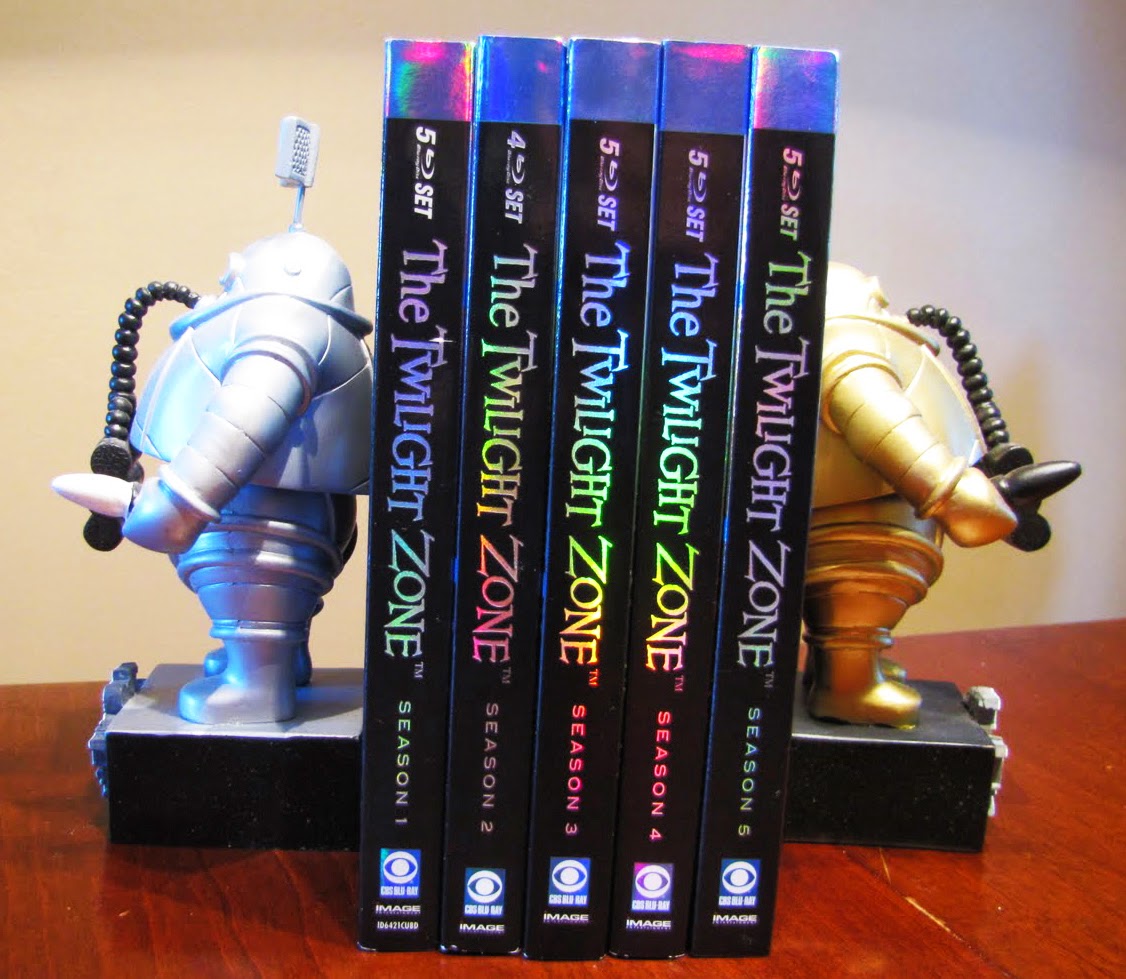 We live in an age of inexpensive DVD and blu-ray sets that comprise entire seasons of television shows. I still marvel at the sight of my five ultra-slim Twilight Zone volumes on blu-ray, which take up a little more than three inches of shelf space. When I first collected TZ, I needed two bookcase shelves for all the VHS tapes and, later, despite the DVD format's thinner profile, the whole series still took up one entire shelf (for the single-disc releases; there were 45 volumes total). The release of the Definitive Edition DVD sets in 2005 brought the space requirement down to about one foot, maybe a bit less (those sets ended up my storage unit when I acquired those impossibly-skinny blu-ray sets in 2010 and 2011. 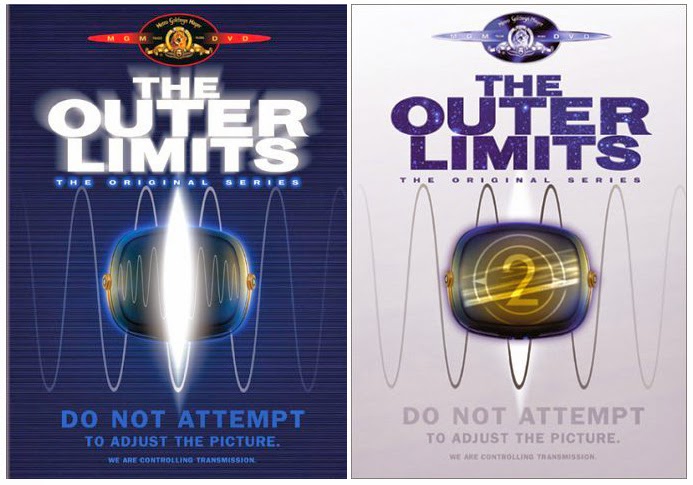 The Outer Limits can also be had on DVD in varying widths. The original season sets were released in 2002 and 2003 in double-wide cases; together they require a little over two inches of shelf space. In 2007, the show was split up into three volumes in single-wide cases, bringing that number down to about 1.5 inches. Those three volumes were then bundled into a single set which, thanks to its outer cardboard slipcase, more or less matches the 2+ inches of real estate demanded by the first DVD sets. In all of its DVD iterations, The Outer Limits has required very minimal room within one's collection... but it hasn't always been that way. 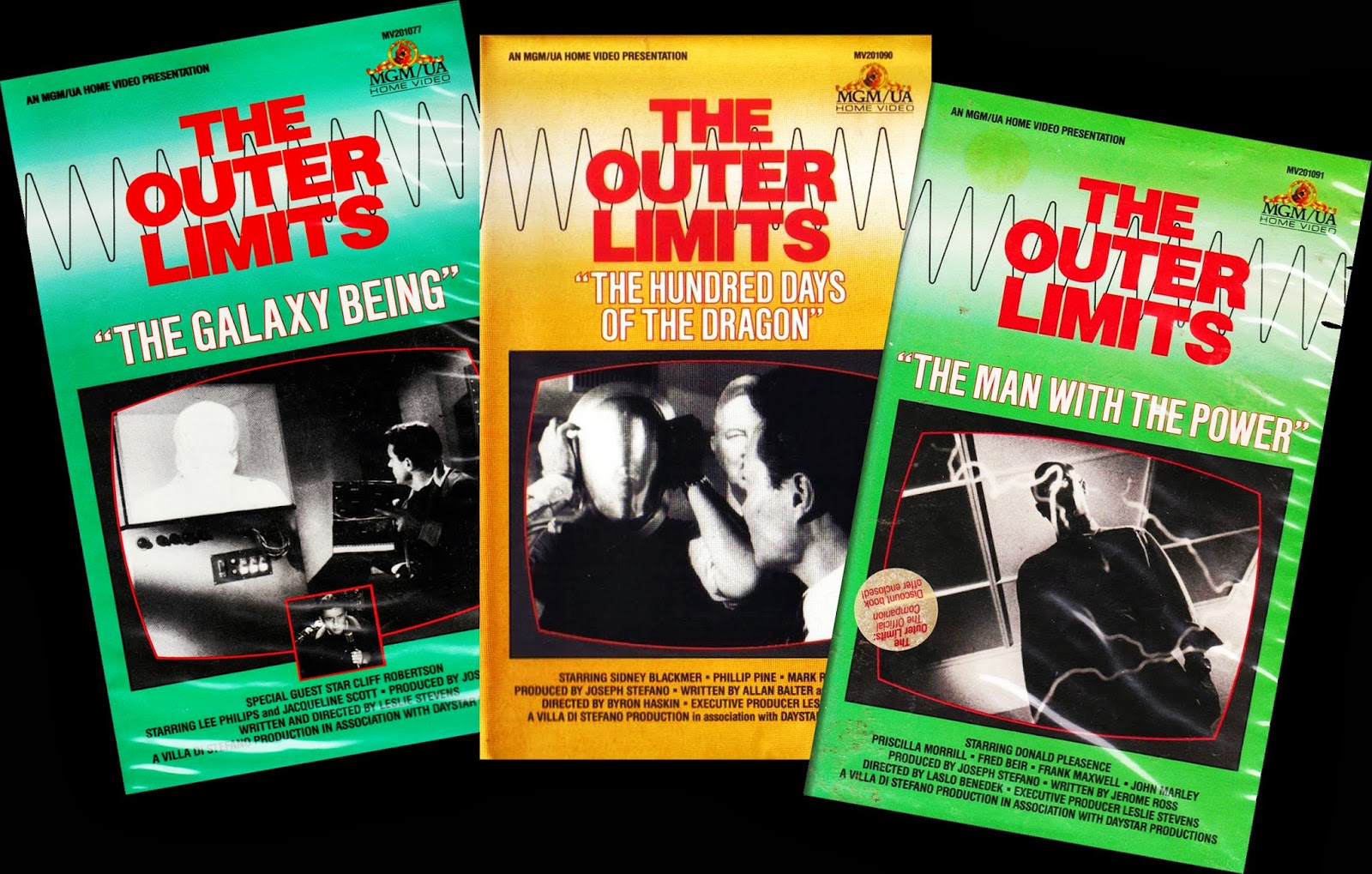 Unless you're fairly young and/or new to The Outer Limits, you may have collected some (if not all) of the series on VHS before they hit DVD. MGM/UA released every single episode, one episode per tape (except for the two-part "The Inheritors," which they stupidly combined into a "feature length" episode, so that one technically had two episodes on it), over a four-year period (1987-1991; Jesus, we were patient back then). Even completist collectors of the superior LaserDisc volumes had to buy tapes if they wanted everything, since 21 episodes never saw release on LD.

I've repeatedly extolled the virtues of the VHS releases in these pages, particularly the awesome blue artwork that tied them all together (which actually drifted toward green as the series wore on, but that sense of visual continuity happily remained intact). I recall gazing lovingly at those blue boxes: I'd lay them out on the floor, my eyes drifting across their faces, my brain generating a strange free-association of images from the episodes. I bought each tape as they came out, and I amassed a total of 24 before I stopped, exactly half of the eventual 48 that would be released.

Thanks to all that loving gazing I did, I can recall exactly which ones I had (in yellow):

Why did I stop? I'd gone from a teenager with a job and disposable income to a college student with very little money, so I didn't have the $12.95 for each tape (and Tower Video charged the full MSRP, the bastards). I planned to catch up, but then I found myself married with babies and having even less money. But I still watched those first 24 pretty regularly, and I managed to snag quite a few of the missing episodes thanks to TNT's MonsterVision marathons in the early 90's, which eased my pain considerably. Here's a great promo:

When DVD rendered my beloved tapes more or less obsolete, I did what many do when a new format supplants the old: I sold them on eBay, except for a couple (I think I still have "The Architects of Fear" and maybe "The Galaxy Being" somewhere in storage; it seems like I saw them not that long ago). Did I get good money for them? I don't recall, but probably not. As I've worked on this blog over the last couple of months... well, I've found myself missing them, I mean really missing them. So much, in fact, that I've decided to recollect them at some point... but only for the boxes, which I can store flat so they won't take up a ton of room. My plan is to acquire high-resolution scans of all of them so I can gaze lovingly at them whenever I want (multiple desktop wallpapers, maybe, or a slideshow of all 48).

You know, that would make a great blu-ray extra: a gallery of all 48 VHS volumes. MGM/UA, are you listening?