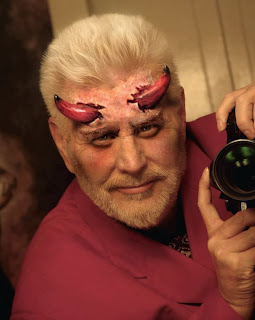 If you frequent various Facebook groups devoted to classic sci-fi, you may have seen the work of Woody Welch, who sketches and paints iconic genre characters with amazing (sometimes startling) near-photorealistic precision (I should also mention that he does some really, um, enticing nudes). He’s also a really nice guy, nice enough to both grant me permission to showcase his work here and to answer a few boring, run-of-the-mill questions that he’s probably answered a million time before.

CB: Take us back to the beginning...Have you been an artist since you were first able to hold a pencil, or did your considerable talents develop later? 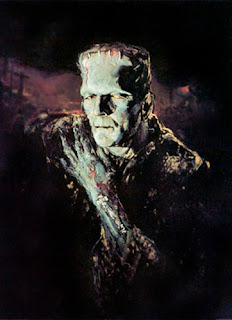 WW: I was born in New York City and my mother was a pin-up for about 19 years for artist Rolf Armstrong. Sometimes I would hang around the studio he had when I was four and five years old. They'd give me paper and pencils to play with and even at that young age I was able to see what he would do with charcoal, pastels and so forth...that's how I began to learn to draw. Armstrong had done this great portrait of the Frankenstein Monster in 1935...he still had it and I was fascinated by the art and the photos that were taken at the time...when I asked who the "square-headed" guy was they told me and that was the birth of THIS monster kid. I got the first issue of Famous Monsters the following year and there was no looking back after that. 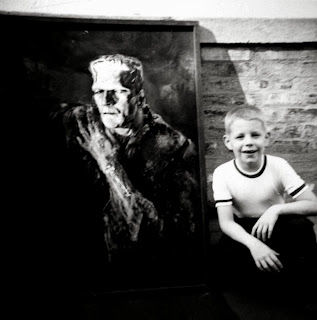 CB:  I seem to recall some amount of Hollywood fame within your immediate family...?

WW: No...but Rolf Armstrong's cousin was the actor Robert Armstrong, (KING KONG, MIGHTY JOE YOUNG) and that's how I learned about those particular types of special effects....stop motion, matte paintings, etc. I think i was eight when i first met "Uncle Bob". [I actually meant your mother, WW. In my universe, pin-up models ABSOLUTELY count as celebrities! - CB]

CB: What were some of your early subjects?  If you say you have been doing nudes since you were a little kid, I'm going to have a new level of respect for you. 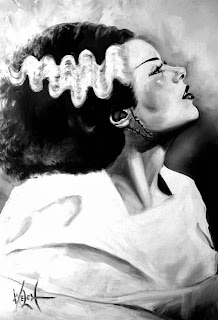 WW: (laughs) I drew mostly dinosaurs because I was obsessed with them....and movie monsters, because I loved them and i could get great reference pictures from the pages of FAMOUS MONSTERS and CASTLE of FRANKENSTEIN and all the rest. The nudes started in middle school....I got caught and had to get a note from my mother..she wanted to see what I had done. When she saw the work she said that if I wanted to do this, that i should not do it in school where i should be learning, but at home. The next day she brought home several "men's" magazines...Playboy, Swank, etc. "If you want to draw nude girls, here are some that you can use for modeling." she said. I became "charlie potatoes" by the time I got to high school. Kids would ask me to draw nudes of Nancy Sinatra and so forth, and I would charge them five bucks a piece. I would hide the money I made in the hollow legs of my Aurora Monster kits because my mom would never think to disassemble something that I had made. I built up quite a bank account in those monster kits!!! 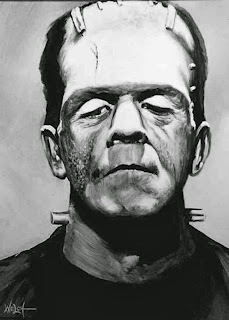 CB: Describe a typical day in the life of Woody Welch. How many commissions would you be juggling at one time?

WW: Well, thanks to the internet, I have reached lots and lots of people, and they have commissioned several things, for example...I am doing covers and science fiction pin ups for magazines in England and I just finished doing a DVD cover for someone, but that's a secret for now...and every once in a while i do storyboards or work on advertising campaigns for films. Mostly though, I do art for me and sling it around to various groups on Facebook, now that I am semi-retired. I have a big one bedroom apartment in a 1930 art deco building in the Hancock Park area of Los Angeles and it has an enclosed balcony which is my workshop. Mostly, I go for walks to my favorite Hollywood restaurants, and engorge myself.

CB: I'm sure you're proud of your impressive body of work in general, but what specific works are you most proud of? What do you hope will live on after you? 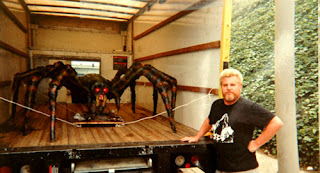 WW: I don't think I've done that piece of art yet...I had a blast working on HALLOWEEN: RESURRECTION, so that goofy thing will live long after I drop dead, and I built, along with my buddy, Jeff Copeland, the giant spider that is attached to the upper face of HOLLYWOOD TOYS, and that damn thing has withstood earthquakes, windstorms and pigeon poop so I know that the fiberglass arachnid will be there long after I have left to join the choir invisible. 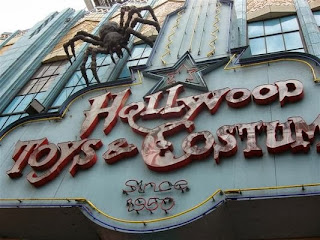 CB: When did you discover the OUTER LIMITS? Did it immediately occur to you to capture its various aliens and monsters on paper? Have you drawn or painted all of them? 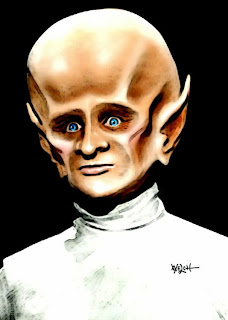 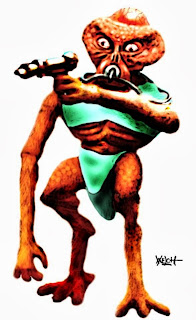 WW: I "discovered" the OUTER LIMITS like most kids my age, (I was eleven) during the waning days of the summer of '63 I believe. All those tv commercials made it look like a show right up my street...and it was. I sculpted several creatures from the show out of modeling clay...the only one I drew was the Thetan from THE ARCHITECTS OF FEAR...drew that in the back of math class...old habits die hard. My favorite are the Zantis because i am a big stop motion nut. Recently i did a drawing in Prismacolors with acrylic washes from a little black and white reference photo I found on the internet. It turned out okay. 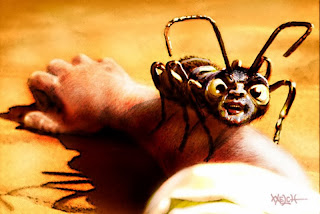 I also did a great deal of character studies of actors and other "things' from the TWILIGHT ZONE over the summer. My favorite of those, would have to be the "reverse angle" of the plane flying over the brontosaurus from ODYSSEY OF FLIGHT 33, simply because it is something that you didn't see in the show. I don't want to paint or draw from photos ALL the time, because you tend to get dependent on them and the creative parts of your brain become softer and squishy. 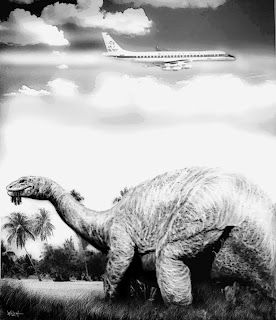 CB: Do you have a favorite OUTER LIMITS character or TWILIGHT ZONE character? If so, what about them speaks to you?

WW: For the OUTER LIMITS it would have to be ALL of the soldiers in NIGHTMARE because each one of them is a part of us...the mama's boy, the poet, the leader(a father figure),  the minority, the strict by-the-book fellow...etc. For the TWILIGHT ZONE, all of the characters in THE MASKS for pretty much the same reason....not just the horrible family, but the good too.... doctor, the butler, and the old millionaire as well.

CB: What's on the horizon for you?

WW: (laughs) I don't know....and that is what makes life worth living. I have friends in Europe and I fly back and forth to see them. I have plans to eat my way through all the finest restaurants in Budapest.....AGAIN!!!! 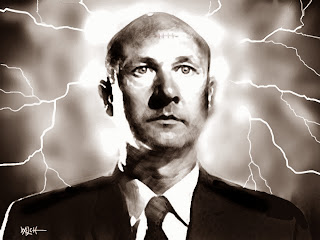 What a great guy! I can't thank Mr. Welch enough for sharing with work (and his words) with me. Next time I find myself in Los Angeles... well, the drinks are on me.

* Just okay? I happen to LOVE Woody's Zanti. In fact, I've been using it as wallpaper on my phone for the past month or so.... 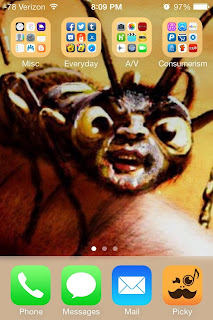