Regular readers of this blog are aware of my intense--- at times irrational--- love for the Outer Limits VHS boxes (documented here) from the late 80s and early 90s. As previously reported, I collected exactly half of the series (24 tapes) between 1987 and 1989. I have vague memories of selling them off on eBay, probably around the time the DVDs were first released in 2002-2003; however, I’m quite certain that I held onto “The Architects of Fear,” because I stumble across it every few years, usually when ransacking old boxes of stuff. But the other 23? Gone, as they say. Gone, baby, gone.

Or so I thought.

We moved (again) a few weeks ago, and this time (Christ, will there ever be a last time?) we’ve decided to ruthlessly pare down our archive of useless crap and ditch the storage unit entirely. This means that I’ve been rooting through boxes that haven’t been opened in years. I’ve found some surprising items, but none as surprising as….. 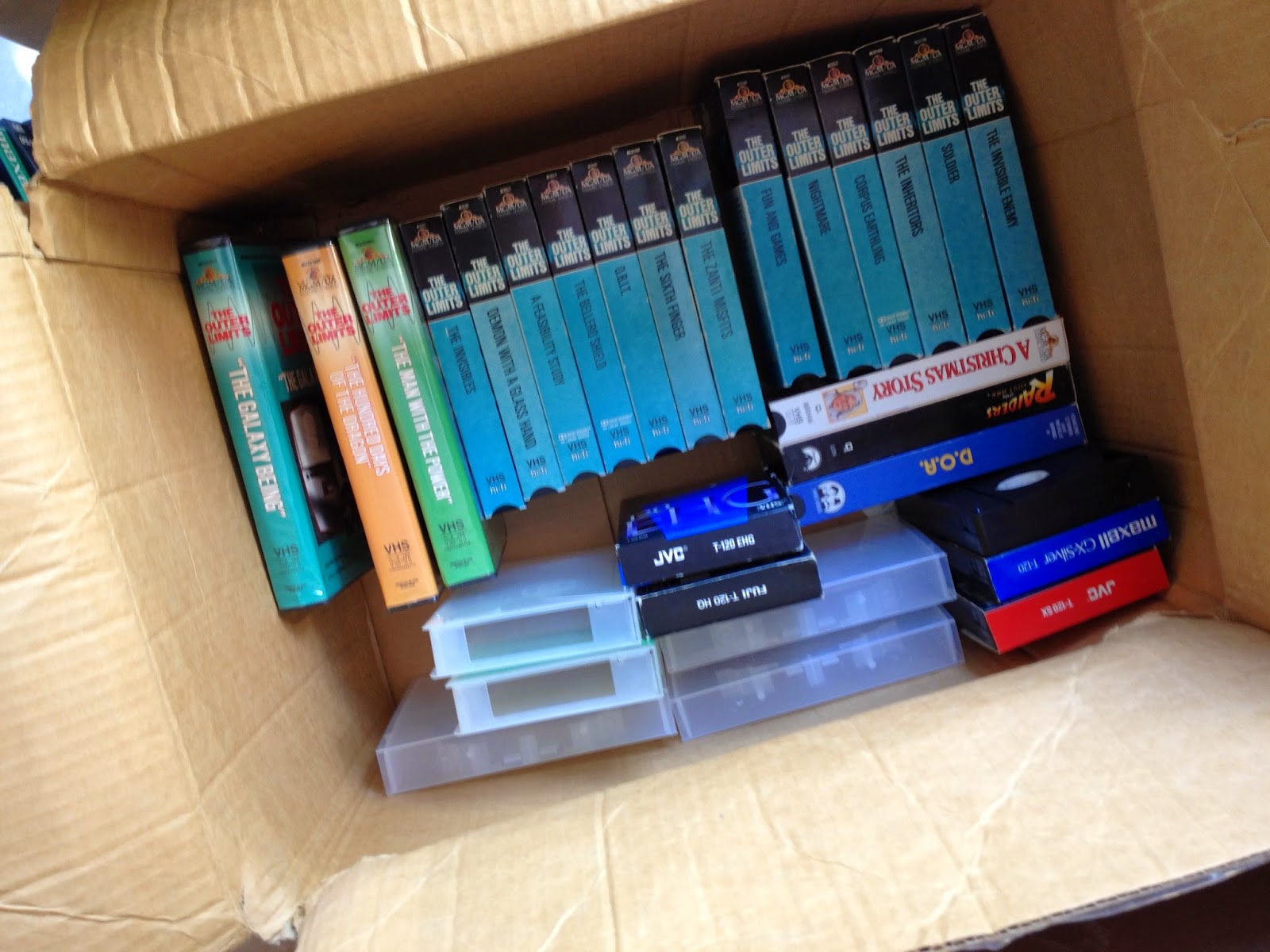 That’s right. My Outer Limits tapes. I. Still. Have. Them.

My mind, as they say, was fucking blown. I was touching a piece of my past that I thought was long, long gone. A quick count revealed that I hadn’t kept all of them: the ancient box marked “Old VHS Tapes”* only held 16 volumes (two-thirds of my original collection, including all three original clamshell releases). Add to that total “The Architects of Fear” (which is still hiding somewhere; it only appears when I’m not looking for it), and we have seven of the clunky bastards MIA, which I’m guessing I really did sell on eBay as my dim memories indicate. I dunno, I must’ve just gradually forgotten that I still had most of them, and have never repelled quite deep enough into the archives to find them before now.

Unfortunately, I shelled out a fair amount of cash last year to recollect them, along with the other 24 volumes I never bought back in the day. But you know what? I don’t even care. Just seeing those tapes, the first Outer Limits merchandise I ever bought**, more than makes up for it. And you’ll even get to appreciate my extraordinary find in these pages very soon: the box scan for this week’s “Demon with a Glass Hand” is way better than the one I’d already prepared (the copy I got on eBay last year was pretty ratty). That's right, I'm all about sharing the wealth.

This is my life in the glow of The Outer Limits: every so often, something unexpected happens that reminds me of the awe and mystery that underlies our brief existence.

* Aside from the smattering of retail-purchased films in there, there was an added surprise bonus (already removed when I snapped the above pic): the entire run of the criminally-underrated Fox TV series Brimstone, which aired for 13 weeks from October 1998 through February 1999. I even had the forethought to tape 'em at SP speed for maximum quality.

** Technically, the very first TOL merchandise I ever acquired was the stack of Twilight Zone Magazines that featured David J. Schow’s eight-part series overview-slash-episode guide (which would form the basis for the first edition of his Outer Limits Companion).