I've gotta say, I've been stressing like hell over this blog. Yup, that's right, it's time for a little therapeutic sharing time. Pull up a beanbag and listen up (I'm holding the talking pillow, so don't interrupt).

I've been writing my Twilight Zone blog for over four years, and I've never experienced this kind of crisis of faith. That blog has always come fairly easily (the conceptual and writing pieces, anyway; see here for a history of the practical difficulties that have surrounded it), and I've certainly never felt that it wasn't a worthwhile endeavor. I dunno, maybe there's a certain amount of safety in the fact that The Twilight Zone has been analyzed and reviewed to death, both in print and online, so there's not much risk being a single voice in a large crowd. But The Outer Limits is different. There's not a whole lot out there, but what is out there is impossible to top. Between David J. Schow's brilliant Outer Limits Companion and John Scoleri and Peter Enfantino's marvelous We Are Controlling Transmission blog from 2011 (in which they watched and reviewed an episode per day)... well, does the world really need another episode-by-episode critique of the series? And even if it does, who am I to presume that I'm the guy for the job? 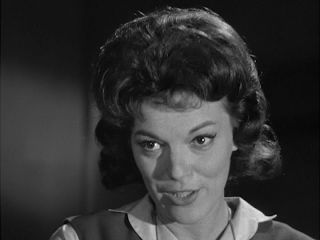 "What makes you think that you can discover anything? Who are you?" needles Jacqueline Scott in the back of my head. Ball buster.

I've been continually reminding myself that I'm not doing this to contribute some invaluable piece of the Outer Limits analysis puzzle, and I'm certainly not doing it to impress anyone. I'm doing it to chronicle a fairly modest task: to watch each episode on its 50th birthday and record my thoughts. Oh, and to have some fun at the same time: as brilliant as the show is, there's much to pwn (as my friends John and Fred would say). If this thing gets read, great. If it gets read and liked, even better. I've made some great friends and colleagues thanks to my TZ blog, and I'd love to see the same thing happen here. And hey, if it leads to some freelance writing jobs, well... bring it on. I don't wanna slave away in a cubicle forever.

Okay, I feel better. Maybe I just needed to write it all down and clarify my objectives. C'mon, bring it in, gang. Group hug.

Now the next question: what will the blog look like, format-wise? I debated whether or not to bother with story synopses, since it’s probably safe to assume that anybody reading this blog will already know the plot of each episode. However, I've historically been pretty spoiler-free over at my Twilight Zone blog (there are exceptions, of course, usually when the episode in question sucks), but in all honesty that approach has hindered my analyses more than a few times. It should be noted that The Twilight Zone is known for its twists and surprises, and therefore demands a certain level of delicacy when it comes to reviews and/or dissection… but that’s not really the case for The Outer Limits, is it? Knowing the ending beforehand doesn't really ruin the viewing experience; so with that in mind, I’m gonna barrel ahead unencumbered and spoiler-filled (I do reserve the right to change my mind along the way, however).

I want to spotlight the various home video releases and collectible merchandise, since I'm a fanboy at heart. And the series has some amazing cinematography, so I want to use lots of screen shots. And I'm a sucker for internet memes, so I'll probably play around with some of my own.

Can you tell I’m basically feeling my way around in the dark here? I really have no idea what this blog will end up looking like once the weekly episode spotlights kick off (tomorrow! Shit, I've got a lot to do tonight). Welcome to my organic, malleable, alcohol-fueled process, folks.