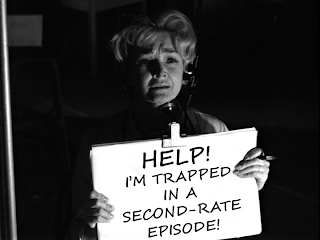 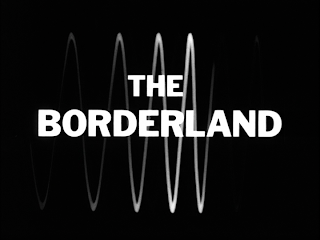 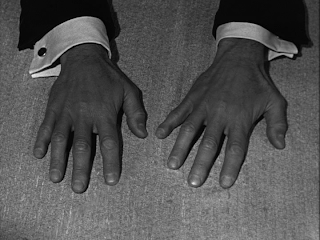 Ian Frazer, his wife Eva and his friend Lincoln Russell crash a séance at billionaire Dwight Hartley’s house by exposing the medium, Mrs. Palmer, as a charlatan. Hartley is desperate to contact his dead son, a desperation which Ian parlays into funding for his experiments in magnetic field reversal. His team recently discovered another dimension of space, accessible by abruptly reversing magnetic polarity under extremely high power, which had the unfortunate effect of turning his left hand into a duplicate of his right hand. 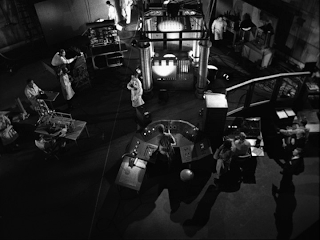 Frazer believes that this “borderland” he’s discovered may be another dimension, and could possibly be a gateway to the afterlife. Hartley is sold, and pledges his resources to furthering Frazer’s work. They set up shop in a local power plant and, after a few experimental run-throughs (a teapot and a lab rat are successfully reversed), Frazer himself enters the magnetic field. Edger Price, Mrs. Palmer’s sociopathic toady, sabotages one of the plant’s generators and causes the team to lose their hold on Frazer, who spirals deeper into The Borderland as the field’s cohesion decays. Eva is able to pull him out in the nick of time, his hand now restored to normal. Hartley, still convinced that the Borderland will lead him to his lost son, leaps into the magnetic field and is vaporized. 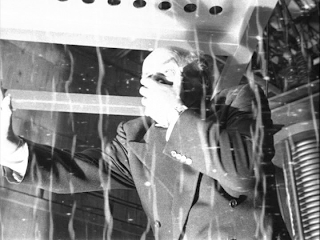 “The Borderland” is written and directed by series creator and executive producer Leslie Stevens. He directed all four of his scripts (no other TOL writer had this privilege), which is impressive, however…. well… okay, I may get crucified for this, but I’m not a big fan of any of his contributions, which is a damn weird thing to say about the creator of the goddamned series. “The Galaxy Being” is pretty good (which it kinda had to be, since it sold the show), but his other three episodes are just… I dunno… limp, I guess. Now, I haven’t seen his other two efforts (“Controlled Experiment” or “Production and Decay of Strange Particles”) in probably 25 years or so, so it’s possible that my opinion of them will be different when I revisit them now… but I kinda doubt it. Stevens’ overall output leaves me, like Ian Frazer’s reversed hand, a bit cold. Now, I’m speaking specifically of his writing; his direction is fine if a bit unremarkable. 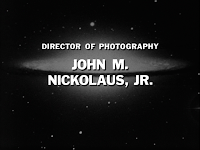 Regular readers of this blog are aware that I’m very pro-Conrad Hall when it comes to the photography on The Outer Limits but, happily, John Nickolaus does a great job with “The Borderland.” There’s quite a bit of sci-fi tech on display, and Nicklaus captures it all quite adeptly with a few nice surprise angles (the upward “huddle” shots of the group looking down at the outcome of their experiments, for example). On the whole, the episode is quite pleasing to the eye. 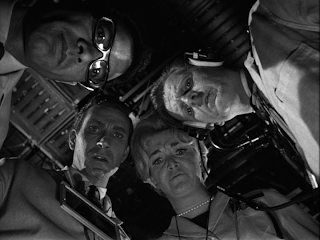 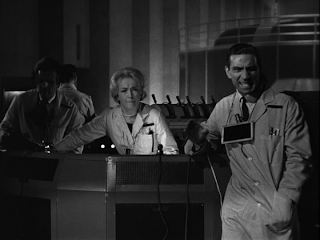 However, it’s not so pleasing on the brain. The characters are as cardboard as they come, and the opportunities for depth aren't so much squandered as ignored. It’s evident that Russell is in love with Eva, but it has no impact on the events of the story. Frazer is a bit of a dick, particularly when he shouts orders at those assisting him (including his wife, who is clearly stung when he does so). Hartley is mono-maniacally devoted to any possible avenue of contacting his dead son, no matter how silly or far-fetched; what he really needs is a fucking grief counselor. Having said all that, I don’t necessarily require depth of character if the story is sound. Unfortunately, this one ain't. The science is so vague that it fails to remain interesting for long. So an alternate (and backwards) dimension can be accessed by screwing around with magnetic fields. Um… okay. And hey, if you stick your hand in the field, it'll reverse it with no ill effects (no need to rewire all of those tendons, nerves and blood vessels). Um... what? Oh, and accessing that negative dimension might result in communication with the dead, even though there’s zero evidence of any connection whatsoever between reversed magnetic fields (even high-powered ones) and the afterlife. Um… WTF? 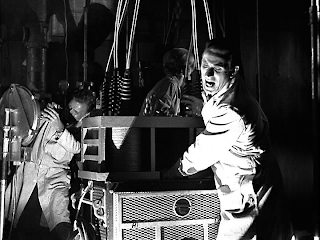 I’m by no means an expert in geomagnetic reversal, and I do understand the requirement to suspend my disbelief (particularly in the fantasy/sci-fi genre), but I need some basis in reality underlining this type of hard science (or even pseudo-science) concept to keep me engaged. “The Borderland” doesn’t possess this; therefore, I can’t buy it. It’s evident that Leslie Stevens’ original concept for the series is quite different from what ultimately emerged with Joseph Stefano driving the boat, so the Stevens scripts seem strange and out of place (at least to me). I’m clearly a diehard member of Team Stefano. 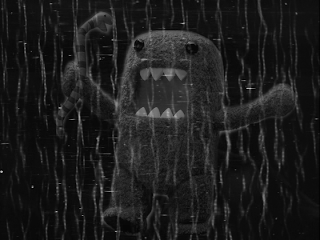 Hey, why not put a trans-dimensional magnetic monster in there to make it interesting? Funny… several Outer Limits episodes were compromised because a monster was shoehorned into a plot that didn't require one (“The Premonition” comes to mind); in this case it might’ve helped.

The reversal effect is quite cool, and the stock shots of the various power generators imbibe a sense of scale (we see a bit too much of them, however). The power plant set itself is impressive, and the milling about of various busybody technicians certainly adds to the illusion of something pretty big happening. 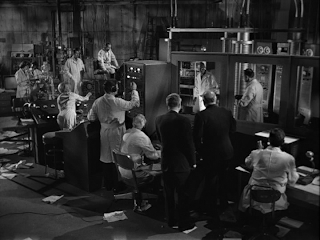 "The Borderland" may be the first and only time a lab rat has exploded on television (sorry, PETA). 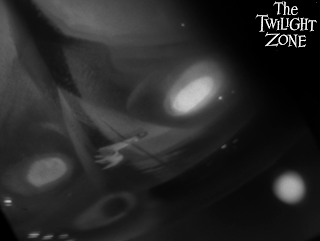 The Borderland itself is, um, interestingly rendered. We see a glimpse of a rocky landscape, which implies that it's a physical location, not just some sort of interspacial negative space. But then some multi-imaging happens, and the mother of all bad acid trips appears to kick in.  I'm reminded of the bizarre and equally senseless fourth dimension depicted in The Twilight's Zone's "Little Girl Lost," which aired almost two years earlier. It's interesting to look at, but what the hell is it we're looking at? 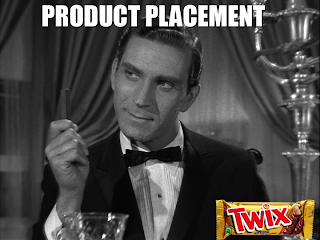 Speaking of The Twilight Zone, we should've known something wacky was coming: while Frazer does a pretty impressive Rod Serling impression describing his discovery of “a doorway into the fourth dimension,” Benson Sawyer looks suspiciously down at his cigarette, as if wondering what the hell he’s been smoking. 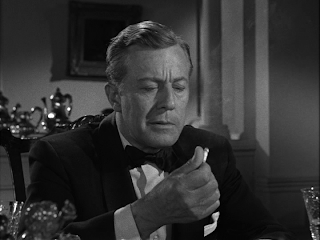 Usually the teasers are brief clips yanked directly out of the episode, but this week's is decidedly and surprisingly different. It's a mash-up of two separate scenes; first, Edgar Price drops the toolbox onto the transformer, causing the explosion; second, Hartley jumps into the magnetic field and, instead of turning into a skeleton, negative-reverses and explodes. So we also get an alternate shot there, which would've required a separate optical effect. 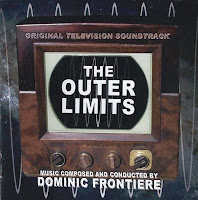 Like Stevens’ previous offering “The Galaxy Being,” “The Borderland” is minimally scored. What we do hear is a four-and-a-half minute Dominic Frontiere original called “The Big Finish” (which we've already heard a few times in other episodes). It, like most of Frontiere’s wonderful compositions for the series, can be found on La La Land Records’ three-disc TOL soundtrack, which is priced to sell at $19.95 plus shipping and, if you don’t already have it… well, move your ass. It will eventually sell out. If you already have it… well, get a spare. I’m gonna. 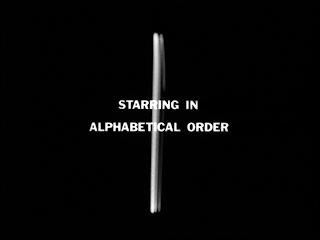 The lead-in to act one is a bit different this week. We usually see the main two or three actors listed, but evidently Daystar felt that this cast was of sufficient stature to drop seven names. We're only spotlighting five of 'em, since the other two (Barry Jones and Gene Raymond) lack connectable genre credits. 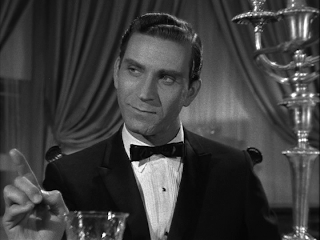 Leading the charge (har har) is Mark Richman (Ian Frazer), who will return in season two’s “The Probe,” incidentally the very last Outer Limits episode. He first got Daystar’s attention when he appeared on their pre-TOL series Stoney Burke, in the episode “The Journey,” which incidentally was the last episode of that series. He also starred in the Twilight Zone episode “The Fear,” which was the next-to-last episode of that series. My point? He leads the charge here, but he seems more adept at bringing up the rear. 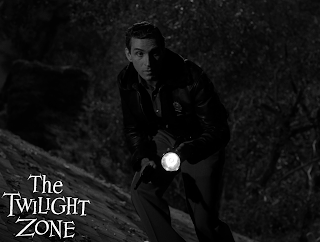 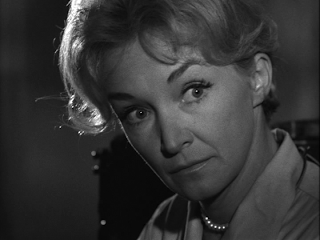 Eva Frazer is played by the talented Nina Foch in her only Outer Limits appearance. I had to dig a bit to find another usable connection, and this one’s kinda flimsy, but… she appeared in “The Trevi Collection,” a 1974 episode of Kolchak: The Night Stalker, a series whose regular cast included Simon Oakland, who will play the Empyrian in “Second Chance” in March. 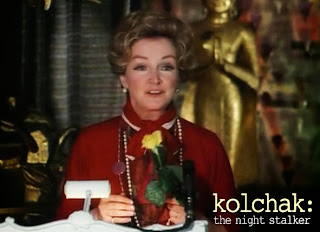 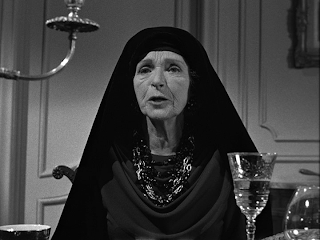 Gladys Cooper (Mrs. Palmer) only visited The Outer Limits this once, but she passed through The Twilight Zone three times (“Nothing in the Dark,” “Passage on the Lady Anne” and “Night Call,” an episode which will turn 50 in February). 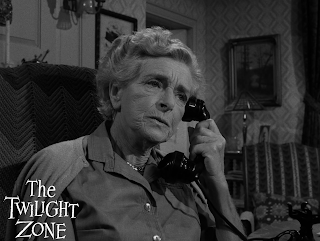 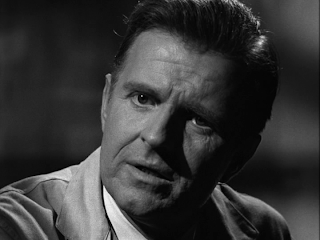 Phillip Abbott (Lincoln Russell), who will return later this season in “ZZZZZ,” was already on Daystar’s radar from his work in the Stoney Burke episode “The Contender.” He also put in two appearances on The Twilight Zone (“Long Distance Call” and “The Parallel”). 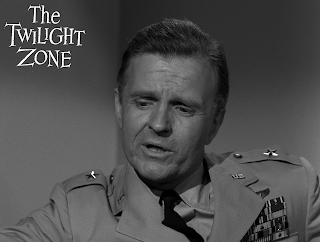 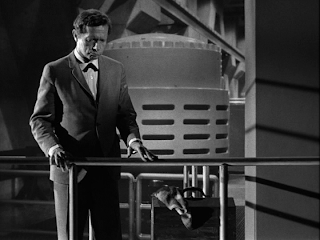 Alfred Ryder is sufficiently creepy as Mrs. Palmer’s de facto henchman Edgar Price in his only Outer Limits appearance. Ryder is probably best known to genre fans for his work in Star Trek’s “The Man Trap” as Professor Robert Crater, who shacks up with the notorious Salt Vampire (which was incidentally designed by Wah Chang, who designed many creatures and aliens for The Outer Limits). 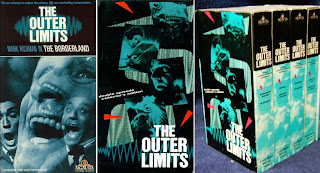 “The Borderland” first entered the home video market on the trusty old VHS format in the early 90’s in two different flavors: the standard retail release (which, as usual, features a great cover), and the mail-order exclusive Columbia House club release (in which it was paired with “The Mice”).

“The Borderland” wasn’t included in any of the four laserdisc volumes, so it wasn’t until 2002 that the episode got a disc-based release with the Complete First Season DVD set. It popped up again in the 2007 repackaged edition (which split the season into two separate chunks), and then again in the 2008 Complete Series boxed set. Be aware that all three different DVD editions are only different in terms of their packaging; the discs inside are identical across the board. 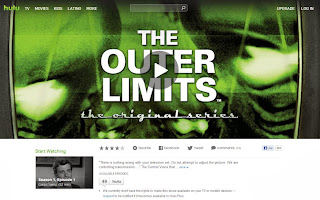 If you can’t be bothered with physical media, click here to stream “The Borderland” for absolutely no charge thanks to Hulu. All 49 episodes are there, so hell, watch ‘em all. Sometimes the best things in life really are free.

“The Borderland” was one of eight episodes represented in Rittenhouse’s Outer Limits trading card series in 2002 (cards 55-63). Unfortunately, their selection is extremely limited: seven of the nine cards feature Mark Richman, and the other two depict the lab rat and Dwight Hartley’s skeleton. No Nina Foch? No Phillip Abbott? No Gladys Cooper? Sheesh. It's not a goddamned one-man show, guys.

“The Borderland” has never spawned any collectibles or model kids, but honestly, why would it? There’s no monster, alien, or energy force anywhere in sight. I suppose they could’ve slapped the Outer Limits logo on a set of magnets, but I can’t imagine any kid would want it, even if he or she was a fan of the show. And I guess you could use just about any toy skeleton and call it Dwight Hartley. 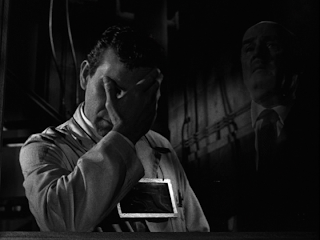 “The Borderland” isn’t exactly terrible, but it’s nothing special either. It's interesting to note that it was the very first regular episode produced (after the pilot "The Galaxy Being"), but it was the twelfth to air, which strongly suggests that Daystar or ABC (or both) knew it didn't have enough spark. For all the electricity thrown around, there’s very little actual energy generated. It’s easily the weakest episode so far.